Answering the Call of Duty 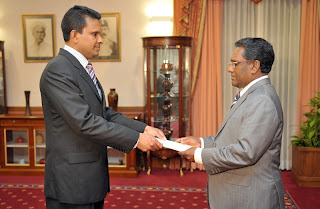 In my 23 years of service for this country, I have served with loyalty respect and integrity. I have put a lot of time and energy in to building this organization and making it what it is now. The initiative and situational leadership I have demonstrated on the 7th of February 2012 and the events that followed was fully motivated by my desire to evade the Maldivian Police and Maldives National Defence Force from going to a chaotic situation that could possibly get escalated as a threat to National Security and demean the name and services of these two organizations for years to come. I couldn’t simply watch this situation from my living room while I knew that as a senior retired officer of the Military, I could offer some help to resolve and rectify the issues. And hence my actions were an answer to the call of duty.


After the resignation of the former President, the current President and the Commander in Chief requested me to take the job as the Minister of Defence and National Security. I couldn't say NO, because the country was going through a difficult time and i believe I am well trained and equipped to take on this responsibility.


I want to assure the Maldivian public that I will give every bit of my time and effort to making this country and the Maldivies National Defence Force a better place for generations to come. Please send any comments this way.